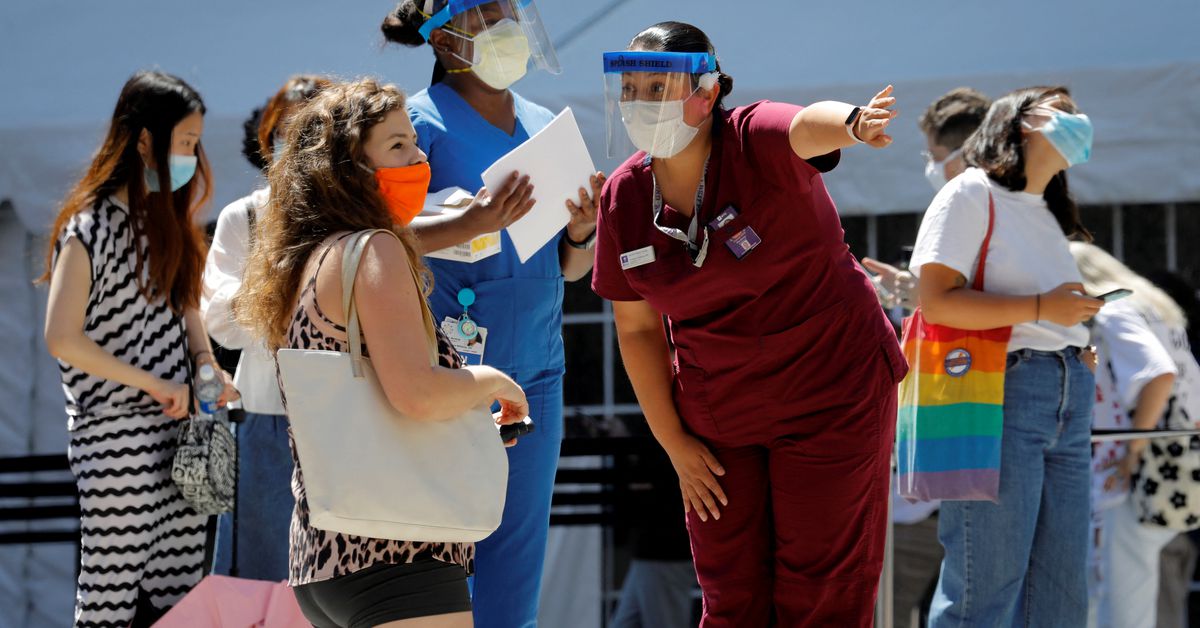 WASHINGTON, Jan 13 (Reuters) – President Joe Biden on Thursday said he was deploying more military health workers to hospitals in six U.S. states, and would give Americans free masks and more free tests to tackle the fast-spreading Omicron variant around the country.

The phased dispatch of 1,000 military health personnel beginning next week comes as U.S. COVID-19 hospitalizations hit a record high with Omicron overtaking Delta as the dominant variant of the coronavirus and health facilities facing a staffing crunch.

The move is “part of a major deployment of our nation’s armed forces to help hospitals across the country manage this surge of the Omicron virus,” Biden said.

“I know we’re all frustrated as we enter this new year,” Biden said, while reiterating his message that COVID-19 continues to be a “pandemic of the unvaccinated.”

In the first wave of the deployment, teams of military doctors, nurses and other personnel will head to Michigan, New Jersey, New Mexico, New York, Ohio and Rhode Island to support at-capacity emergency rooms and free up overwhelmed hospital staff for non-COVID cases, the White House said.

But with the teams ranging in size from seven to 25, hospitals due to receive the health workers welcomed the assistance but warned it would not be enough to combat the surge.

“There is not a silver bullet solution,” said Bob Riney, president of healthcare operations at Detroit’s Henry Ford Health System, which has already received some federal help and expects to welcome new military medics next week.

“We have systemic challenges (with) incredible volume and very, very tired medical practitioners … and that is true of all health systems that have been in the middle of this surge,” Riney said.
The White House’s more aggressive stance follows months of criticism from health experts that the administration was relying too heavily on vaccines alone to stop the spread of the coronavirus, especially given a politically motivated anti-vaccine movement pushed by some Republican officials. About 62% of Americans are considered fully vaccinated, according to U.S. data.

She told CNN earlier the top request from states asking for federal aid “continues to be staffing.” Other states are likely to need reinforcements of military and other federal doctors and nurses as well, she said.

A healthcare worker directs a student towards the end of the line at a testing site for the coronavirus disease (COVID-19) set up for returning students, faculty and staff on the main New York University (NYU) campus in Manhattan, New York City, New York, U.S., August 18, 2020. REUTERS/Mike Segar

Biden also announced he would direct the U.S. government to procure an additional 500 million COVID-19 tests to help meet surging demand across the country. The White House had previously pledged 500 million tests would be available to Americans starting in January.

The president also said the administration next week will announce it will make high quality masks available for free, noting that about a third of Americans report they do not wear a mask.

Some states’ hospitals are at or near capacity.

New Jersey had 6,089 COVID patients in hospital on Wednesday, a Reuters tally showed. Around 73% of hospital beds in the state are filed, as well as 53% of intensive care unit (ICU) beds.

In Rhode Island, where the Department of Health and Human Services said 86% of hospital and 90% of ICU beds are filled, hospital officials were hopeful federal help would offset staffing shortages caused by Omicron infections to personnel that are hitting many health systems.

With a high number of hospital staff falling ill with COVID, the surge has “created a lot of stress on the system in a world where it’s hard to staff the beds that we have,” Rhode Island Hospital President Saul Weingart said, adding that his hospital expects to receive 20 military health workers.

Several states have already declared emergencies to loosen regulations and free up funding to cope with the Omicron-driven surge.

There were 133,871 people hospitalized with COVID in the United States on average over the past week, the Reuters tally showed. The increase has forced several states to postpone elective surgeries.