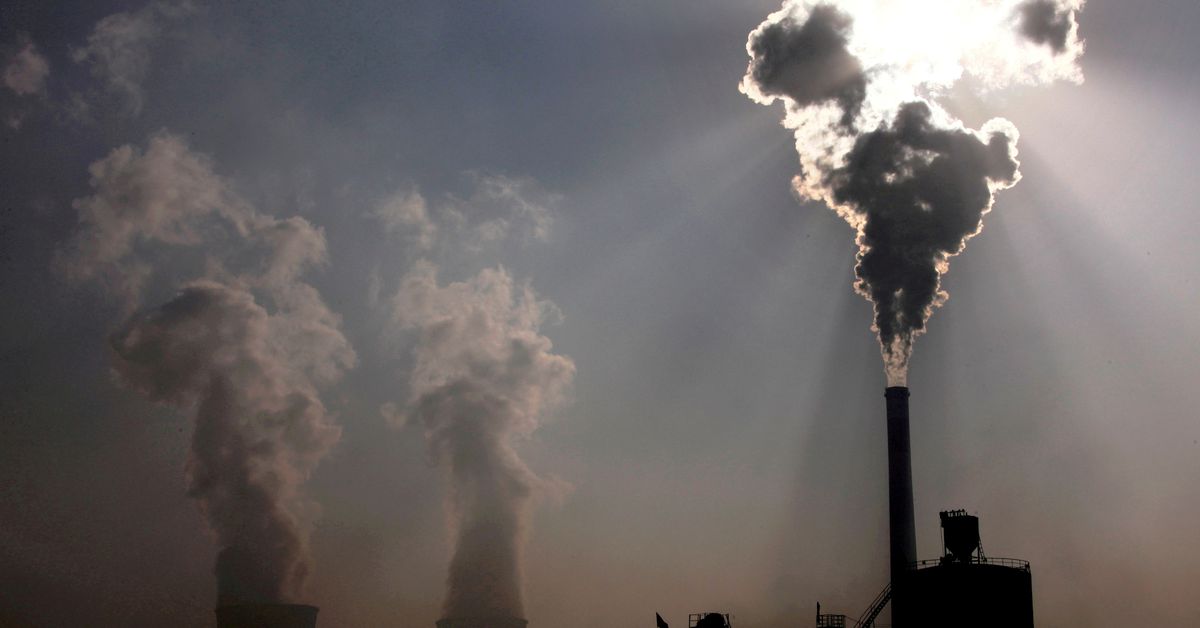 A coal-burning power plant can be seen behind a factory in the city of Baotou, in China’s Inner Mongolia Autonomous Region, October 31, 2010. REUTERS/David Gray//File Photo

Oct 8 (Reuters) – China ordered miners in Inner Mongolia to ramp up coal production and oil prices jumped on Friday as a record surge in the cost of gas revived demand for the most polluting fossil fuels to keep factories open and homes heated.

The rebound in economic activity from coronavirus restrictions has exposed alarmingly low supplies of natural gas leaving traders, industry executives and governments scrambling as the northern hemisphere heads into winter.

The energy crisis, which has led to fuel shortages and blackouts in some countries, has highlighted the difficulty in cutting the global economy’s dependency on fossil fuels as world leaders seek to revive efforts to tackle climate change at talks next month in Glasgow.

In China, where coal production had been curtailed to meet climate goals, officials have ordered more than 70 coal mines in Inner Mongolia to ramp up production by nearly 100 million tonnes or 10%, as the world’s largest exporter battles its worst power shortages in years.

Russia’s Gazprom, a key supplier of gas to China, calmed fears that a fire at a major gas processing plant could worsen the situation, saying it was able to continue exporting gas to China as normal.

India, the second largest coal consumer after China, is also suffering electricity outages because of a lack of coal with over half of its coal-fired power plants having less than three days worth of fuel stocks, data from the federal grid operator showed.

Oil prices rose on Friday, on track for gains of nearly 5% this week, as industries switch fuel.

“A lot of catalysts are out there to keep the oil market tight,” said Edward Moya, a senior market analyst at brokerage OANDA.

Reflecting the gravity of the situation, the United States has not ruled out tapping into its strategic petroleum reserves, which it typically only does after major supply disruptions such as hurricanes, or pursuing a ban on oil exports to bring down the cost of crude oil, though there are doubts it is ready to take such action yet.

“DOE is actively monitoring global energy market supply and will work with our agency partners to determine if and when actions are needed,” a spokesperson for the Department of Energy said.

Global fuel shortages are another blow to a world economy just getting back on its feet after the coronavirus pandemic and threaten an expensive winter for consumers.

China is going to allow coal-fired power prices to fluctuate by up to 20% from base levels, instead of 10-15% previously, in order to prevent high energy consumption, state broadcaster CCTV reported on Friday, citing a meeting of the State Council, or cabinet.

“It is really tough to cope with such abnormal prices. At the moment, we have no other option but to buy to keep economic activities going,” an official of state-run Petrobangla, which oversees LNG supplies, said.

Bangladesh is reviewing leases of five oil-fired power plants which are nearing expiry, despite its plan to move from oil towards natural gas for power generation.

Even before the current energy crisis erupted, the world was far behind on efforts to avert catastrophic climate change with a United Nations analysis estimating that global emissions would be 16% higher in 2030 than they were in 2010 based on countries’ current pledges.

Surging energy prices are stoking tensions in Europe over the green transition. Wealthier nations want to keep up the pressure to quit fossil fuels while poorer ones, worried about the cost to the consumer, are wary.

Britain’s energy regulator warned that energy bills, which have just been hiked, are likely to rise significantly in April due to high wholesale costs which have forced some suppliers out of business.

Divisions within the European Union have deepened, with Hungary’s Prime Minister Viktor Orban blaming European Union action to combat climate change for the current crisis and saying Poland and Hungary would present a united front at the next EU summit.

Analysts have said rising gas prices are the main driver of European electricity costs, while the soaring cost of permits on the EU carbon market has contributed around a fifth of the power price increase.