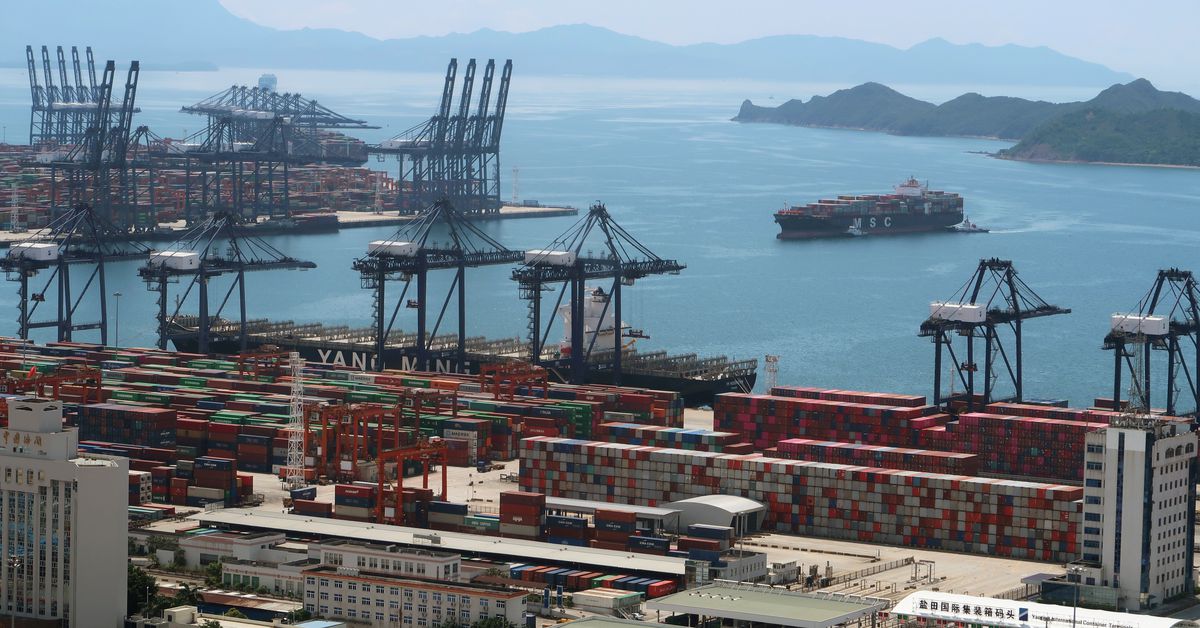 A cargo ship carrying containers is seen near the Yantian port in Shenzhen, Guangdong province, China May 17, 2020. REUTERS/Martin Pollard/File Photo

BEIJING, Jan 13 (Reuters) – China’s economic growth is likely to slow to 5.2% in 2022, before steadying in 2023, a Reuters poll showed, as the central bank steadily ramps up policy easing to ward off a sharper downturn.

The expected 2022 growth would be lower than the 5.5% analysts had forecast in a Reuters poll in October, underlining multiple headwinds facing the world’s second-largest economy due to a property downturn, a crackdown on debt, tougher pollution measures and strict COVID-19 curbs which have hit consumption.

Gross domestic product (GDP) likely expanded by 8.0% in 2021, according to the median forecasts of 62 economists polled by Reuters, slower than an 8.2% rise seen in October’s forecast but still the highest annual growth in a decade.

Analysts attribute the solid 2021 expansion partly to the low base set in 2020, when the economy was jolted by COVID-19, which first emerged in China. The ensuing government lockdowns paralyzed activity across much of the country.

But momentum cooled markedly over the course of last year. GDP in the fourth quarter likely grew 3.6% from a year earlier, which would be the weakest pace since the second quarter of 2020, slowing from 4.9% in July-September, the poll showed.

On a quarterly basis, growth is forecast to rise to 1.1% in the fourth quarter from 0.2% in July-September, the poll showed.

Chinese leaders have pledged more support for the slowing economy, which is facing a fresh challenge from the recent local spread of the highly-contagious Omicron variant.

“To shore up economic activity, we think sufficient policy support will be provided, especially in H1, to ensure that this year’s economic growth does not fall below Beijing’s comfort level,” Tommy Wu at Oxford Economics said in a note.

China’s leaders aim to achieve economic growth of at least 5% in 2022 to keep a lid on unemployment, policy sources said.

With the new year expected to start off on a weak note, the People’s Bank of China (PBOC) is set to unveil more easing steps, though it will likely favour injecting more cash into the economy rather than cutting interest rates too aggressively, policy insiders and economists said. read more

Last year, policymakers focused on curbing property and debt risks which exacerbated the economic slowdown. But they have sought to fend off a sharper slowdown that could fuel job losses ahead of a key Communist Party Congress late this year.

The PBOC is likely to cut banks’ reserve requirement ratios (RRR) by 50 basis points (bps) in the first quarter of 2022, according to the poll.

Analysts expect the PBOC to cut the one-year loan prime rate (LPR), the benchmark lending rate, by 5 bps in the first quarter, followed by another 5 bps cut in the second quarter.

The PBOC last cut the RRR – the amount of cash that banks must hold as reserves – by a 50 bps on Dec. 15, its second such move last year. That was followed by a 5 bp cut in the one-year loan prime rate (LPR), the benchmark lending rate, on Dec. 20.

(For other stories from the Reuters global economic poll: read more )