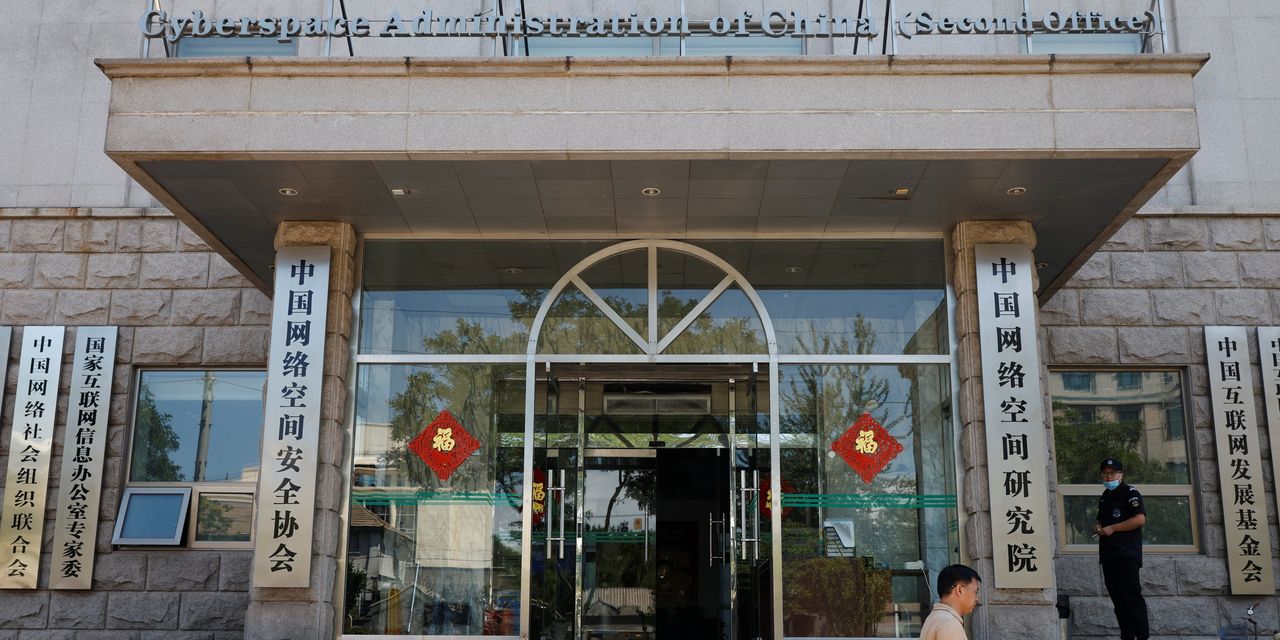 TAIPEI—A sweeping new plan to restrain the algorithms that power tech platforms has thrust China to the forefront of a growing movement to curb the influence of giant internet companies.

Launched last week by the Cyberspace Administration of China, the campaign aims to establish a comprehensive system to regulate the use of algorithms within three years, part of the ruling Communist Party’s effort to rein in what it sees as unscrupulous business practices and exert more control over online discourse.

Regulators called for algorithms to be fair and transparent, while adhering to China’s Communist Party ideology.

The campaign puts China a step ahead in policing tech platforms, as governments around the world grapple with how to respond to automated technologies that are rewiring business, social interactions and politics.

Earlier this year, the European Union proposed restricting certain uses of artificial intelligence to mitigate potential harms. In the U.S., lawmakers are scrutinizing the impact of Facebook Inc.’s algorithm-driven content on users, after The Wall Street Journal reported that the company’s Instagram app has a negative effect on children’s mental health.

China has targeted algorithms more aggressively in its tightening oversight of its domestic tech sector. Draft guidelines released this summer would require algorithms to protect the rights of workers and consumers, and prohibit the use of algorithms to manipulate user accounts, online traffic or search results.

“We don’t necessarily see China as a regulatory innovator, but in this case they are,” said Rogier Creemers, an assistant professor at Leiden University in the Netherlands who focuses on Chinese tech policy.

Under the three-year plan released last week, Chinese regulators outlined steps to monitor algorithms, including a registration process and the establishment of a technical team to evaluate an algorithm’s mechanisms and risks.

The latest campaign builds on a broader regulatory push in China’s tech sector that has prompted investigations into some of the country’s largest companies, including e-commerce giant Alibaba Group Holding Ltd. , food-delivery platform Meituan and ride-hailing company Didi Global Inc. The push is partly directed at business practices that regulators deem harmful to workers or consumers.

The Cyberspace Administration of China, Alibaba and Didi didn’t respond to requests for comment. China is currently celebrating its National Day holiday.

What impact will the scrutiny of regulators have on China’s tech platforms? Join the conversation below.

Meituan declined to comment. The company earlier published an explanation of its delivery algorithm and said it was making changes to give delivery drivers more flexibility.

Experts said tightening controls over algorithms without crimping growth or innovation in one of China’s most successful sectors will be a challenge for regulators. Internet companies rely on the complex mathematical instructions for functions from analyzing social-media behavior to mapping optimal delivery routes.

While algorithms have contributed to technological advancements and social development, the CAC said in last week’s announcement, they have also “brought challenges to safeguarding ideological security, a fair and equal society and Internet users’ legal rights.”

James Gong, a Beijing-based partner at the law firm Bird & Bird, said stricter regulatory oversight of algorithms would likely have an effect across China’s Internet industry.

“Almost all of them use algorithms and automatic decision-making and profiling to make sure their marketing is more precise and to improve their efficiency of the business and increase profit,” Mr. Gong said of the country’s internet companies.

A senior manager at ByteDance Ltd. that said while the requirement to register algorithms would add only one step, restricting the learning of user behavior and recommendation services, as well as requiring the disclosure of proprietary technology, could hurt the company’s business.

ByteDance, which owns social-media sensation TikTok and its Chinese sister app Douyin, is known for its powerful algorithms that drive user recommendations and content.

“The regulatory climate is clear, and we need to start thinking about how to adjust accordingly,” said the ByteDance manager. Since much of the new regulation is still under debate, it is difficult to say what the immediate business impact will be, he said.

Samm Sacks, senior fellow at Yale Law School’s Paul Tsai China Center, said China’s approach could appeal to other countries that want a thriving digital economy while maintaining a firm grip on political and societal discourse. However, she said there is still plenty of uncertainty over the details and enforcement of these new regulations

“I think they understand that this is kind of an impossible task that they’ve set up for themselves,“ said Ms. Sacks. “I would even say that three years might be ambitious.”

The CAC guidelines also said that the algorithms used by Chinese companies must uphold core socialist values and promote “positive energy” in the content they provided to users.

China has been exerting more control over online content and communities. In recent months, it has severely restricted online-videogame time for players under 18, banned pop-idol rankings and criticized online male personalities for appearing too effeminate.

“This is almost taking online censorship up a notch,” said Ms. Sacks. “It’s saying you have an obligation to ensure any content that is driven by an algorithm that you feed into the online space has to be shaping socialist values.”

—Raffaele Huang contributed to this article.