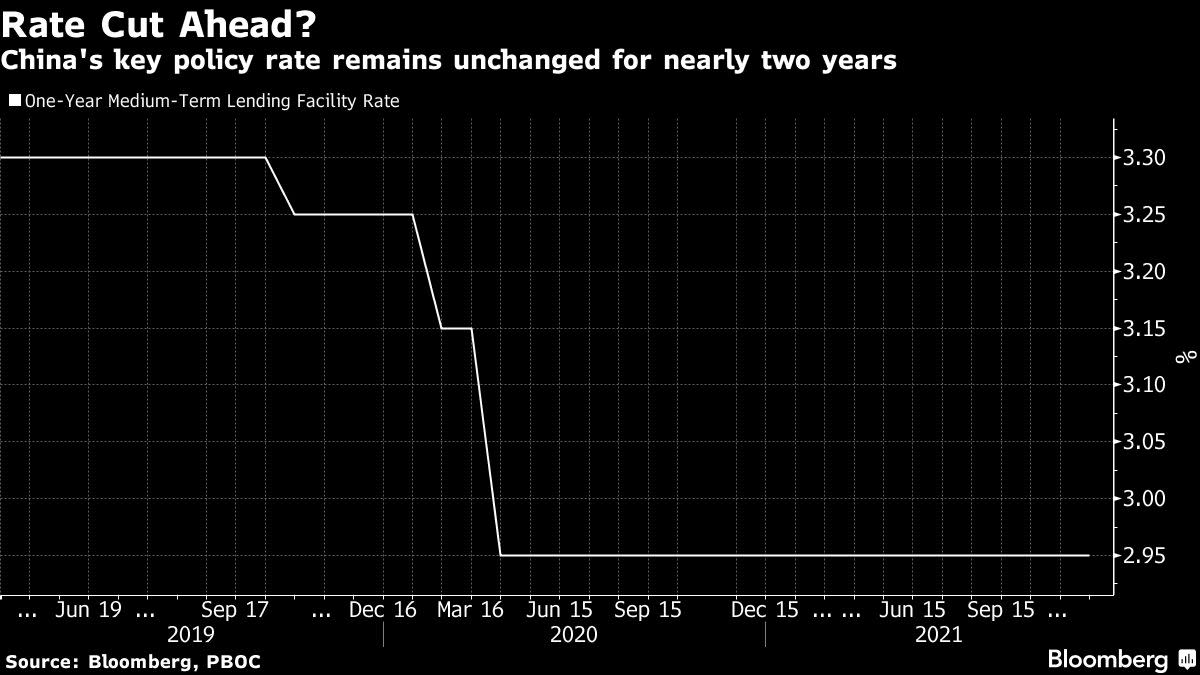 Most Read from Bloomberg

Expectations of an interest-rate cut in China are increasing after authorities pledged to ensure economic stability this year.

The People’s Bank of China could lower the cost of medium-term loans — a key policy rate — as soon as next week, according to Scotiabank currency strategist Qi Gao. He predicts a 5 to 10-basis point reduction from 2.95%, which would be the first cut since April 2020. Strategists at Australia & New Zealand Banking Group say the one-year rate “seems too high,” without specifying when a cut could happen. Goldman Sachs Group Inc. this week joined the chorus. BNP Paribas SA and DBS Bank Ltd. have also flagged the possibility.

China’s central bank fueled speculation it will ease monetary policy sooner rather than later with its vow in December to take “proactive” action. Fresh pandemic outbreaks and lockdowns add to challenges for an economy already grappling with weak private consumption and a property market slowdown. Looser policy contrasts to the U.S., where traders now expect the Federal Reserve will hike rates four times this year.

Read more on where central banks may change rates by 2022

China’s policy shift became evident in early December. President Xi Jinping oversaw a meeting of the Communist Party’s Politburo that concluded with a signal of an easing on real estate curbs — a key overhang for the economy. The PBOC then lowered the amount of cash banks needed to hold in reserve, adding liquidity to the financial system. Chinese banks followed with a cut to their key lending rate in December for the first time in 20 months.

The PBOC is likely to publish results of its monthly medium-term loan operation on Jan. 17, the same day the government will release data showing the economy likely slowed to 3.6% in the fourth quarter, according to a Bloomberg survey of economists. That would be the weakest pace since the second quarter of 2020.

Goldman Sachs cut its forecast for China’s economic growth this year to 4.3%, down from the bank’s previous projection of 4.8%. The bank’s China economist Hui Shan sees the drag partly offset by monetary and fiscal easing with a 10 basis point reduction in the MLF rate cut, open market operations and loan prime rates in the first half.

The PBOC could trim the cost of 7-day repos — a shorter-term interest rate — as soon as Friday, according to Li Chao, an analyst at Chinese brokerage Zheshang Securities Co., and then follow with cuts to the 14-day repo and MLF rates on Jan. 17. That’s because interbank rates have been consistently lower than the policy rate, Li wrote in a note.

Not everyone is calling for a policy rate cut. Standard Chartered Plc. says China is unlikely to be too aggressive in a Fed-tightening cycle due to risks of volatility in emerging markets.

“It has historically been very rare for the PBOC to be cutting rates while the Fed is hiking — the last one was more than 20 years ago in June 1999,” said Becky Liu, head of China macro strategy at Standard Chartered.

Most Read from Bloomberg Businessweek