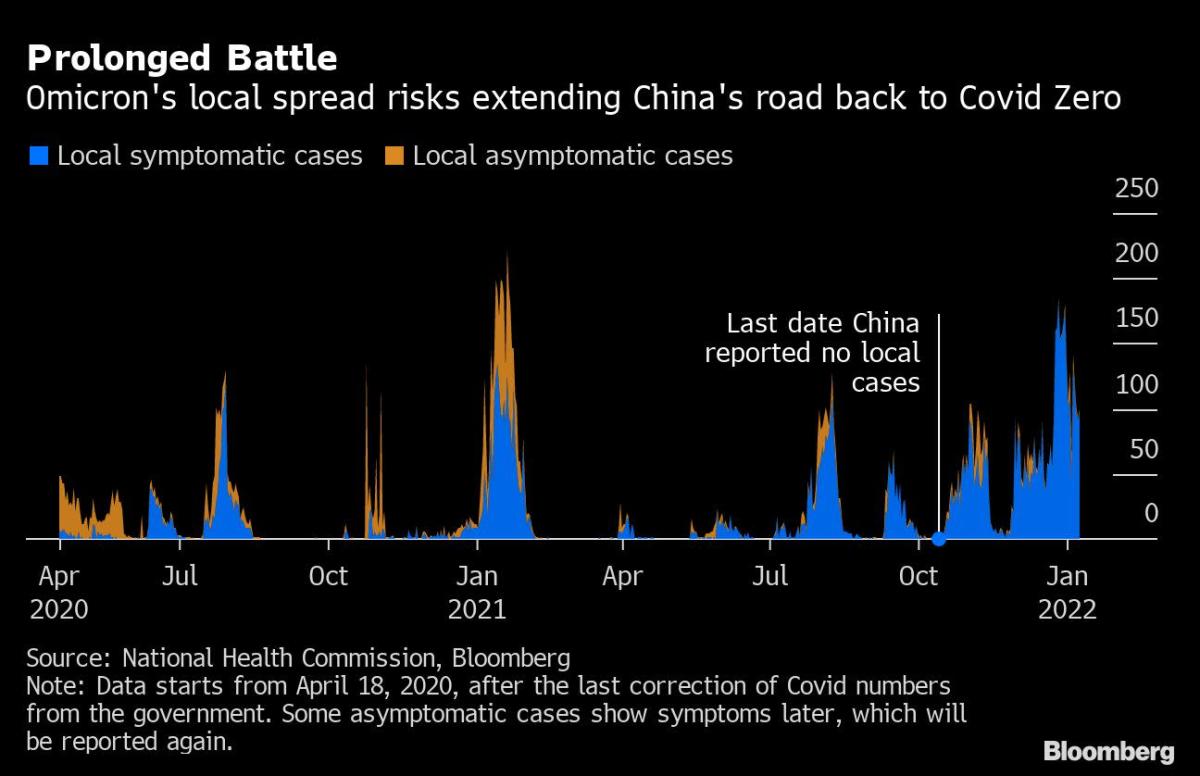 (Bloomberg) — Supply Lines is a daily newsletter that tracks Covid-19’s impact on trade. Sign up here, and subscribe to our Covid-19 podcast for the latest news and analysis on the pandemic.

Most Read from Bloomberg

An omicron outbreak in China is sending jitters through supply chains as manufacturers and shippers brace for disruption inside the world’s-biggest trading nation if it can’t contain the fast-spreading variant.

In 2020 and 2021, China’s ‘covid-zero’ strategy meant factories could stay open throughout the pandemic to produce everything from health equipment to laptops that global consumers hoovered up at a record pace. But there’s been confirmed cases of local infection everyday since mid-October and it’s likely even tougher restrictions will be needed to curb omicron’s spread, with knock-on consequences for ports and factories as more cities lock down.

So far China’s not facing the problems seen elsewhere like shortages of some foods in Australia or Japan, or an estimated 5 million workers staying home sick in the U.S. last week. But with an end to ‘covid-zero’ unlikely as China prepares to host the Winter Olympics next month and a series of political events later in the year, policy makers have to decide how much to increase restrictions, and consider how that will hit an already slowing economy and global trade.

“The reality is that China remains the center of global manufacturing,”said Thomas O’Connor, a supply chain expert at Gartner Inc. in Sydney. “If there was significant manufacturing or logistic shutdowns in China associated with covid-related challenges, that would have a massive impact on the global economic environment.”

In recent weeks, sporadic outbreaks scattered across the country of both the delta and omicron variants have already triggered shutdowns to clothing factories and gas deliveries around one of China’s biggest seaports in Ningbo, disruptions at computer chip manufacturers in the locked-down city of Xi’an, and a second city-wide lockdown in a different province Tuesday.

There are other cities nearby facing some restrictions, and authorities in the southern technology and manufacturing hub of Shenzhen tightened restrictions on vehicles entering the city Tuesday. That prompted concern about delays at nearby Yantian port, which is one of the biggest container ports in Asia and was partly closed for a month last year after an outbreak.

One manufacturer caught up in the current delays is Sidney Yu, whose Hong Kong-based firm Prime Success Enterprises Ltd. makes educational and recreational products like children’s tents and pet baths.

Yu has five containers delayed due to the outbreak in Ningbo, where some of his production is based. He’s worried that if he doesn’t get his products shipped before the looming Chinese New Year holidays — when factories shut for weeks — he will miss the window to get his spring and summer range of goods to market in time.

“This is a critical time before Chinese New Year,” Yu said. “We have a lot of shipments going out as we try to catch the last few weeks before the holiday starts.”

The snarls in China comes as a global economy swamped in omicron grapples with shortages of truck drivers, pilots, supermarket staff and other frontline workers, extending a supply crunch that dogged the world through much of 2021 and sent prices soaring. Shipping container costs remain multiples of levels seen early in the crisis, raw material prices remain elevated, and disruptions are likely to last through this year, according to analysis by Oxford Economics.

Production across South East Asia was hammered last year as manufacturing nations like Vietnam and Malaysia enforced strict lockdowns, causing long delays in production of semi-conductors, clothing and more. It also prompted some firms to bring production back to China, which was able to export record amounts of goods despite the occasional domestic outbreak, shipping congestion and problems at ports in the U.S. and elsewhere.

However, a surge in omicron across China and the rest of Asia could trigger “the mother of all supply chain stumbles” this year, according to Frederic Neumann, co-head of Asian economic research at HSBC Holdings Plc. Bank of America economists warned that Asia has yet to see a major wave of omicron, meaning the worst of the impact has yet to come.

If China does succeed in containing the virus again it will ease global supply pressures, but for manufacturers like Yu, the near term isn’t offering any respite from the lingering problems.

“For the next six months I don’t see any big improvements,” Yu said.

Most Read from Bloomberg Businessweek