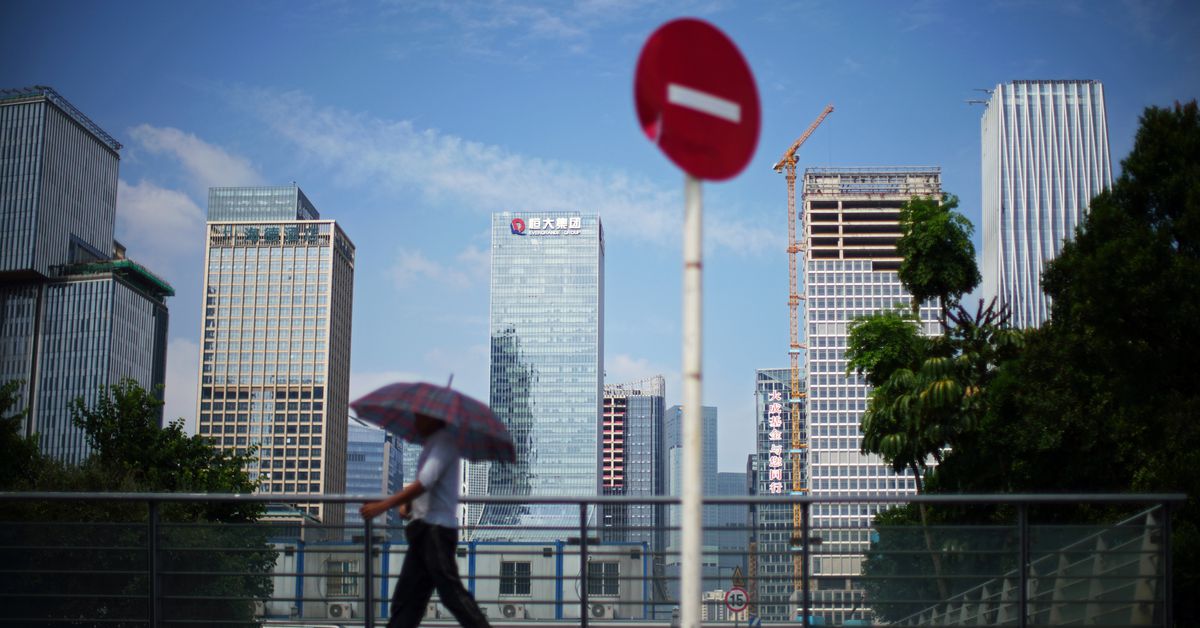 A man walks past a No Entry traffic sign near the headquarters of China Evergrande Group in Shenzhen, Guangdong province, China September 26, 2021. REUTERS/Aly Song/Files

Oct 8 (Reuters) – China’s markets return on Friday after a seven-day break with barely any fresh insight of how regulators propose to contain the contagion from cash-strapped China Evergrande Group’s debt problems or even the firm’s own plans to sell its units.

Evergrande (3333.HK) is facing one of the country’s largest-ever defaults as it wrestles with more than $300 billion of debt.

The company last month missed coupon payments on two dollar bond tranches. The possible collapse of one of China’s biggest borrowers has triggered worries about contagion risks to the property sector in the world’s second-largest economy, as its debt-laden peers are hit with rating downgrades on looming defaults.

Bloomberg reported on Thursday that some dollar bondholders were invited by advisers to a call on Friday 0630 EST (1030 GMT) to discuss strategy and how to broaden the group.

A group of bondholders previously selected investment bank Moelis & Co and law firm Kirkland & Ellis as advisers on a potential restructuring of a tranche of bonds, two sources close to the matter said in September. read more

Chinese regulators have not made any comments specifically on Evergrande during the week-long holiday from Oct. 1, although the central bank last Wednesday urged financial institutions to co-operate with relevant departments and local governments to maintain the “stable and healthy” development of the property market and safeguard housing consumers’ interests.

Investors have been waiting to hear from the company after it requested a halt in the trading of its shares in Hong Kong on Monday pending an announcement about a major transaction. Evergrande Property Services Group (6666.HK), a spin-off listed last year, also requested a halt and said it referred to “a possible general offer for shares of the company.”

While a sale of assets would temporarily ease concerns around Evergrande’s cash flows, analysts also reckon the indebtedness of Evergrande and some other Chinese property firms is too large to be resolved quickly.

An index of China high-yield debt (.MERACYC), which is dominated by developer issuers, has been sliding through the week and is down more than 21% since May. It could soon see spreads at their widest ever.

The property sector’s troubles mounted during the Golden Week break. Two Hong Kong property agencies said they are suing Evergrande over unpaid commissions, while bonds of other property firms such as the Kaisa Group (1638.HK), Central China Real Estate (0832.HK) and Greenland (600606.SS) were battered by the uncertainty.