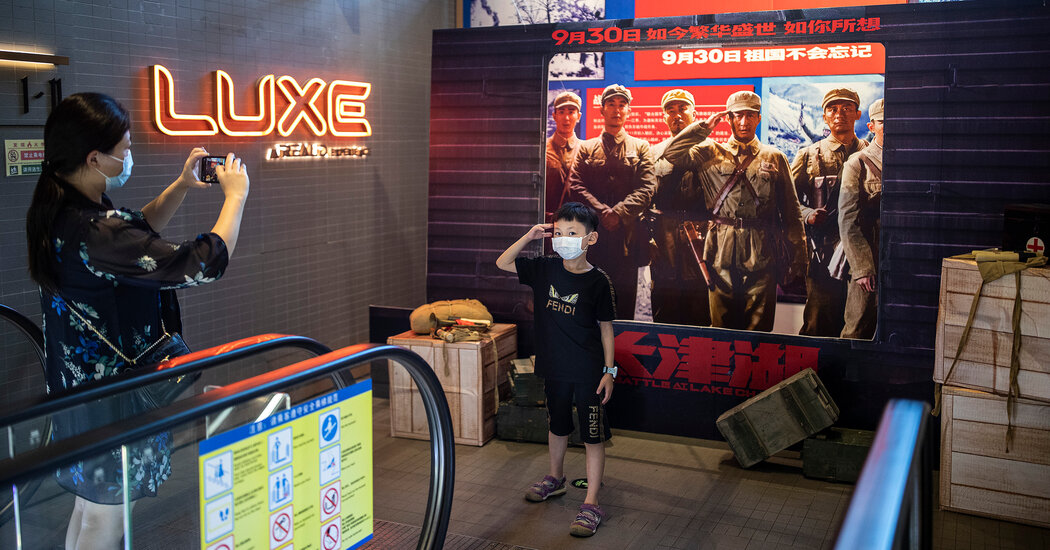 The movie runs at 2 hours 56 minutes, a government-sponsored, action-filled and patriotism-packed drama that cost more to make than any Chinese film before it. It seems to be just what audiences in China wanted.

“The Battle at Lake Changjin,” a blockbuster that depicts an against-all-odds defeat of the United States during the Korean War, has been smashing box office records since opening last week on the eve of China’s annual October holiday, known as Golden Week.

As a barometer of Chinese politics and culture, it feels very much a movie of the moment: aggrieved, defiant and jingoistic, a lavishly choreographed call to arms at a time of global crisis and increasingly tense relations with the world, especially the United States.

The villains are American soldiers and commanders, including a reasonable impersonation of Gen. Douglas MacArthur. The heroes are the Chinese “volunteers” hurled against what was then viewed as the world’s most invincible army.

The battle, better known in the United States as the Battle of Chosin Reservoir, drove the Americans and their allies out of North Korea in the winter of 1950, setting the stage for the stalemate that ended with a cease-fire three years later. It has entered Communist Party lore as an unvarnished triumph in the infancy of the People’s Republic of China, though it came at a terrible cost for the Chinese people.

On its second day in cinemas, Friday, Oct. 1, it broke China’s single-day box office record, raking in more than $60 million. By Tuesday, it had grossed more than $360 million, according to Maoyan, which tracks ticket sales, putting it on pace to be among the most successful Chinese films ever made.

“It is an extraordinary and perfect collusion of capital and political propaganda,” Sun Hongyun, an associate professor at Beijing Film Academy, said in an interview.

Depictions of the Korean War — known in China as “The War to Resist U.S. Aggression and Aid Korea” — have long been a staple of Communist Party propaganda. A flurry of them appeared last year, with mixed success, during the 70th anniversary of the start of the war and China’s intervention in October 1950 as the North Korean forces faced annihilation.

In this case, “The Battle at Lake Changjin,” which cost a reported $200 million to make, seems to have resonated more broadly with the public than the usual agitprop. It did so despite mixed reviews, a torturous running time and technical errors of military history, tapping into nationalistic sentiment that China’s leader, Xi Jinping, has nurtured.

Mr. Xi used last year’s anniversary of the war to declare that the Chinese people would never shrink from any confrontation against foreign aggression.

“The national feeling displayed in the film echoes the rising public sentiment in safeguarding national interests in front of provocations, which has great implications for today’s China-U. S. competition,” the Global Times, an official newspaper that is itself a barometer of the country’s hawkish views, declared in one of several articles championing the film.

The movie also owes its popular success to the cast, which include some of the country’s biggest stars.

Among them are Jackson Yee, the pop idol who was in the Oscar-nominated “Better Days” in 2019, and Wu Jing, the leading man whose role in a pair of action films gave the name “wolf warrior” to China’s recent brand of brash diplomacy. (“Wolf Warrior 2,” which earned nearly $900 million when it was released in 2017, remains China’s highest grossing film.)

“The Battle at Lake Changjin” was one of several films with overtly patriotic themes approved for release during the holiday, seemingly at the expense of Hollywood blockbusters still awaiting approval, including Marvel Studios’ “Black Widow” and Warner Media’s “Space Jam: A New Legacy.”

The Chinese film, which had been scheduled for release in August, was delayed as the government imposed new restrictions on cinemas during Covid-19 outbreaks. China’s movie industry, along with those everywhere, has suffered badly during the pandemic, but the film signaled a potential revival, even though pandemic restrictions still enforce capacity limits on theaters in many cities.

The movie depicts one of the bloodiest battles in the Korean War, which began in June 1950 when the Communist North Korea invaded South Korea to unify the divided nation following World War II. China intervened just as the American-led forces fighting under a United Nations mandate were on the verge of victory.

The battle was fought over 17 days in November and December 1950 after China’s newly arrived forces encircled American, British and South Korean troops in brutally cold mountainous terrain. The Chinese military forced them to retreat to the port at Hungnam, setting the stage for a triumphant climax, with soldiers waving a sea of red flags in victory.

The war remains a sensitive topic, despite — or because of — its portrayal as an unabashed victory for the newly formed People’s Republic of China.

Details of the enormous Chinese losses were kept secret for years. According to the official death toll, cited by Mr. Xi last year, 197,000 Chinese soldiers died, though historians broadly agree the number was much higher. Even now, the death of one of Mao Zedong’s sons, Mao Anying, long attributed to a careless urge to cook fried rice, remains a fraught topic.

“The Battle at Lake Changjin” was made with government support and guidance, underscoring the lengths the authorities will go to shape popular culture.

Wang Jiequn, director of the Beijing Municipal Film Administration, part of the Communist Party’s propaganda office in Beijing, said at a news conference last month that the authorities had “organized and planned” the production with the film’s makers, Bona Film Group and Bayi Film Studio. She called it “our gift to the party on its 100th birthday,” which was celebrated with great fanfare in July.

Laura Li, 31, watched the film with her father on Monday in a crowded theater in Shenzhen. She found the movie banal but was surprised to see many young people in the audience. Her father, a fan of war movies, wept during the scenes showing Chinese soldiers frozen to death on the frigid battlefield.

“Now we see more and more domestic movies able to arouse Chinese people’s patriotism,” said Ms. Li, who is a project manager at a technology company.

“I still prefer American films,” she added, “though it’s getting harder to see one.”