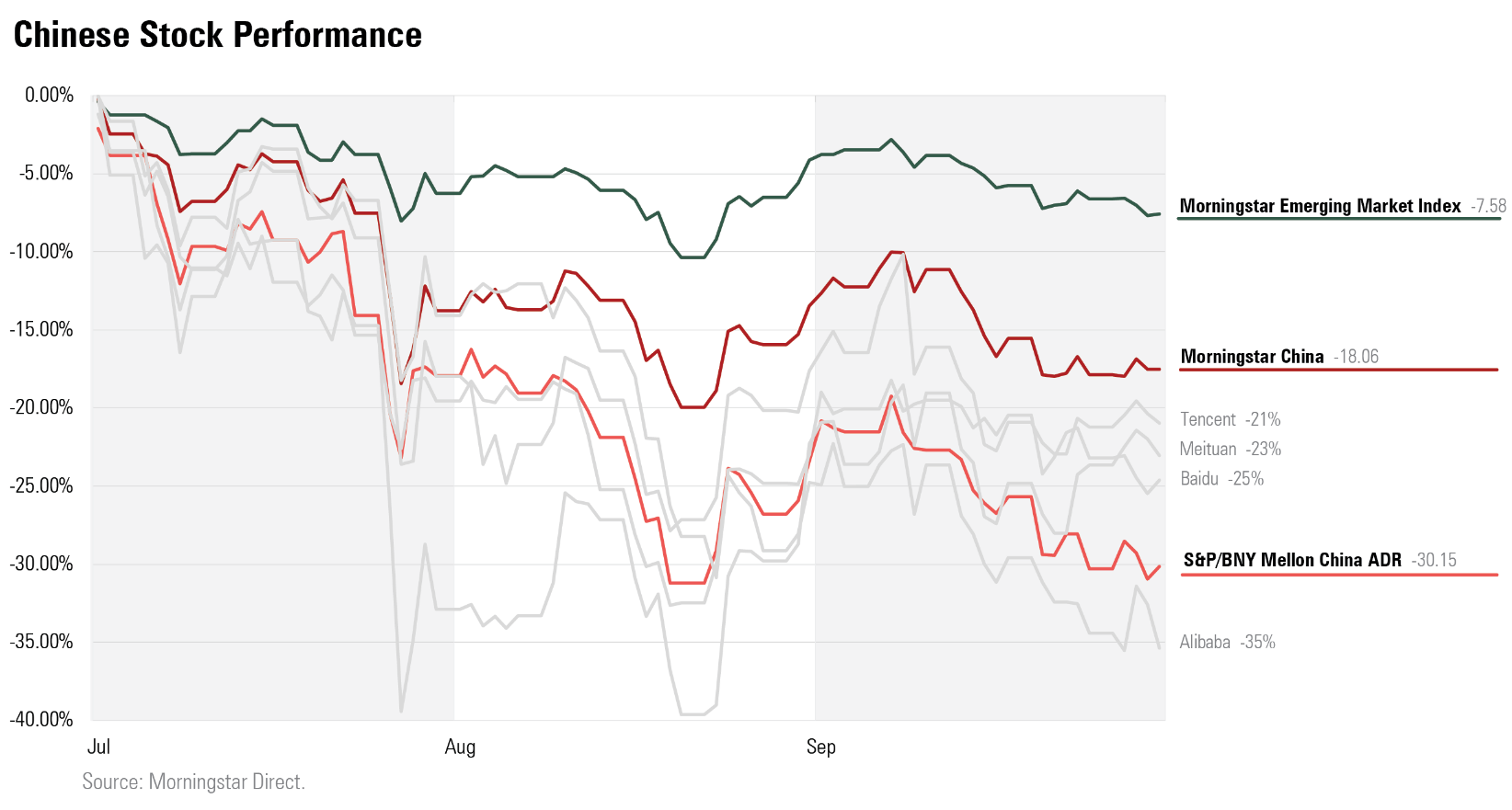 While you might not own shares of Chinese companies directly, you likely are exposed to them if you own an emerging-markets stock fund. The average fund in the diversified emerging-markets Morningstar Category allocates 30% of its portfolio to Chinese stocks and fell 7.5% last quarter. Assets have flowed into emerging-markets funds (and other foreign stock funds) as market valuations reached all-time highs in the United States, and these investors may now be contending with losses.

Technology and clean energy sector funds have also been popular this year, and some own Chinese stocks. E-commerce giants JD.com (JD) and Baidu (BIDU) are held by some technology funds, including ARK Autonomous Technology & Robotics (ARKQ), and electric-vehicle maker (NIO) is a popular holding in clean energy funds.

The largest fund in the diversified emerging-markets category, Vanguard Emerging Markets Stock Index (VEIEX), held 36% of its portfolio in Chinese companies as of Sept. 30, a slightly higher than average stake. The fund, which has a Morningstar Analyst Rating of Bronze, fell 7.0% during the quarter, with its largest holdings, Tencent, Alibaba, and Meituan (MPNGF), all declining more than 20%.

IShares Core MSCI Emerging Market ETF (IEMG), another mammoth fund in the category, had a 30% stake as of Sept. 30 and lost 7.9%. 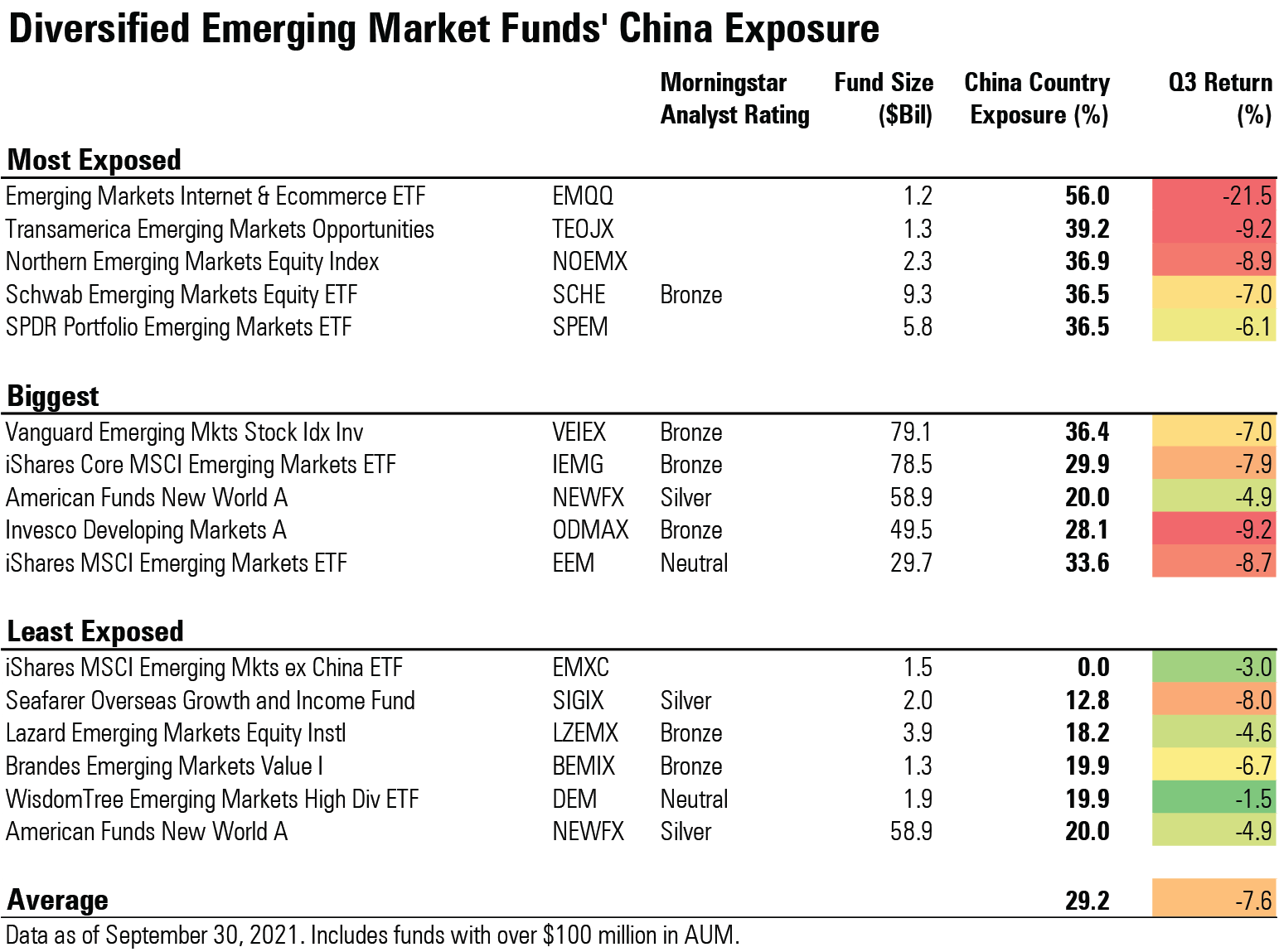 Funds with outsize China exposure were generally harder hit. Transamerica Emerging Market Opportunities (TEOJX) holds 39% of its fund in Chinese stocks, and the fund fell 9.2% in the third quarter. Tencent Holdings and Alibaba were two of the top holdings, contributing to the fund’s dismal performance.

The most drastic losses were suffered by EMQQ Emerging Markets Internet & Ecommerce ETF (EMQQ), which fell 21%. The fund is focused on Internet and e-commerce sectors, two of the areas hit hardest by the crackdown, and its top four holdings all fell by more than 20%. 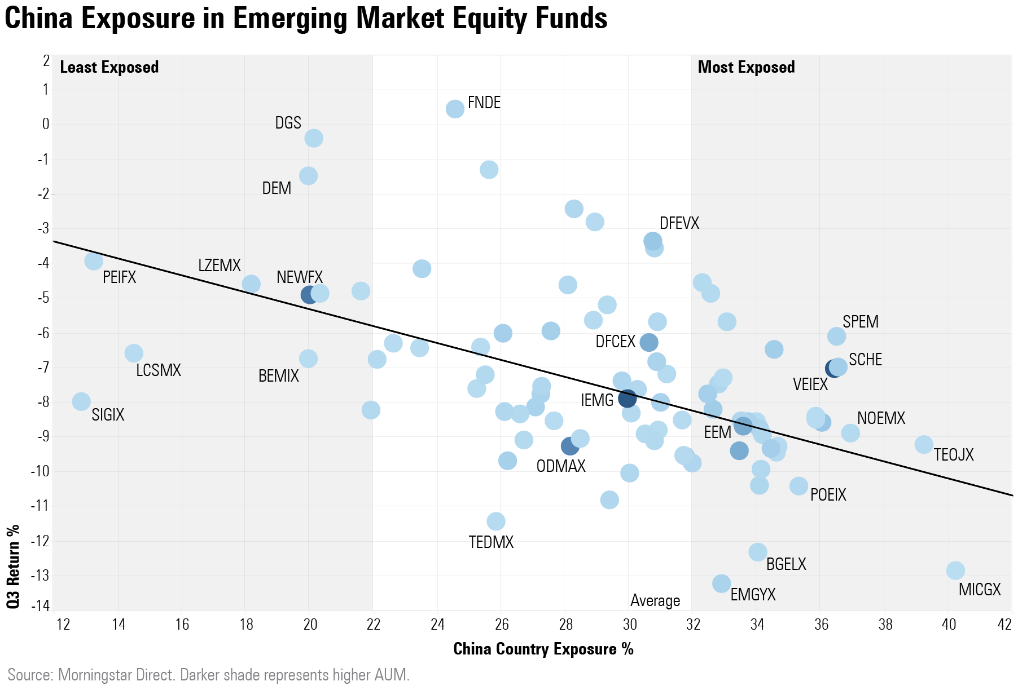 Funds with less exposure generally fared better. American Funds New World Fund (NEWFX), with a Morningstar Analyst Rating of Silver, carries one of the smallest exposures to China in the category, 20%, and lost only 4.9% in the third quarter. Similarly, Bronze-rated Lazard Emerging Markets Equity (LZEMX) has only 20% of the fund in China and lost only 4.5%.

Dividend-focused funds tend to carry less exposure to China than the average emerging-markets fund and held up better well in the third quarter. The WisdomTree Emerging Markets High Dividend ETF (DEM) strategy targets the highest-yielding 30% of stocks listed in emerging markets and weights them by the total value of dividends paid on shares of common stock focus. This meant the fund excluded some of the Chinese technology stocks that fell the hardest. The fund fell only 1.5% in the third quarter.  DFA Emerging Markets Value (DFEVX) keeps 30% of its portfolio in Chinese stocks, on par with the average emerging-markets fund, but the fund suffered a much less severe blow because of its sector weightings. The fund’s portfolio is only 13% in technology stocks compared with the category average of 23%. The fund instead owns many Chinese banking and financial-services stocks, which didn’t fall as harshly. The fund fell only 3.5% last quarter.

Two ARK funds, managed by Cathie Wood, own stakes in Chinese stocks, and both have fallen more than 8% in the quarter. JD.com, a Chinese e-commerce company, was ARK Autonomous Technology & Robotics ETF’s (ARKQ) second-largest holding as of July 1. The fund held 6.9% of its portfolio in the company, which fell 9.5% in the quarter. The fund was also hurt by its 4.5% weight in Baidu, which fell 25%. The fund decreased its stakes in both companies by more than half throughout the quarter. ARK also owned JD.com ADR and Tencent Holdings in its ARK Fintech Innovation ETF (ARKF). The financial technology fund fared slightly better, falling only 8.7%, versus ARK Autonomous Technology & Robotics ETF’s 9.6% decline.

Clean energy funds are another area that sometimes carries exposure to China. Invesco Solar ETF (TAN) held 6.94% of its portfolio in Xinyi Solar Holdings (XNYIF) and another 3.62% in Daqo New Energy (DQ), which produces polysilicon used in solar panels.  NIO (NIO), an electric-vehicle company, was First Trust Nasdaq Clean Edge Green Energy ETF’s (QCLN) largest holding as of July 1. The fund held nearly 10% in the company, which fell 33% in the third quarter. Other holdings in the fund include XPeng (XPEV), another electric-vehicle company, which fell 17%.