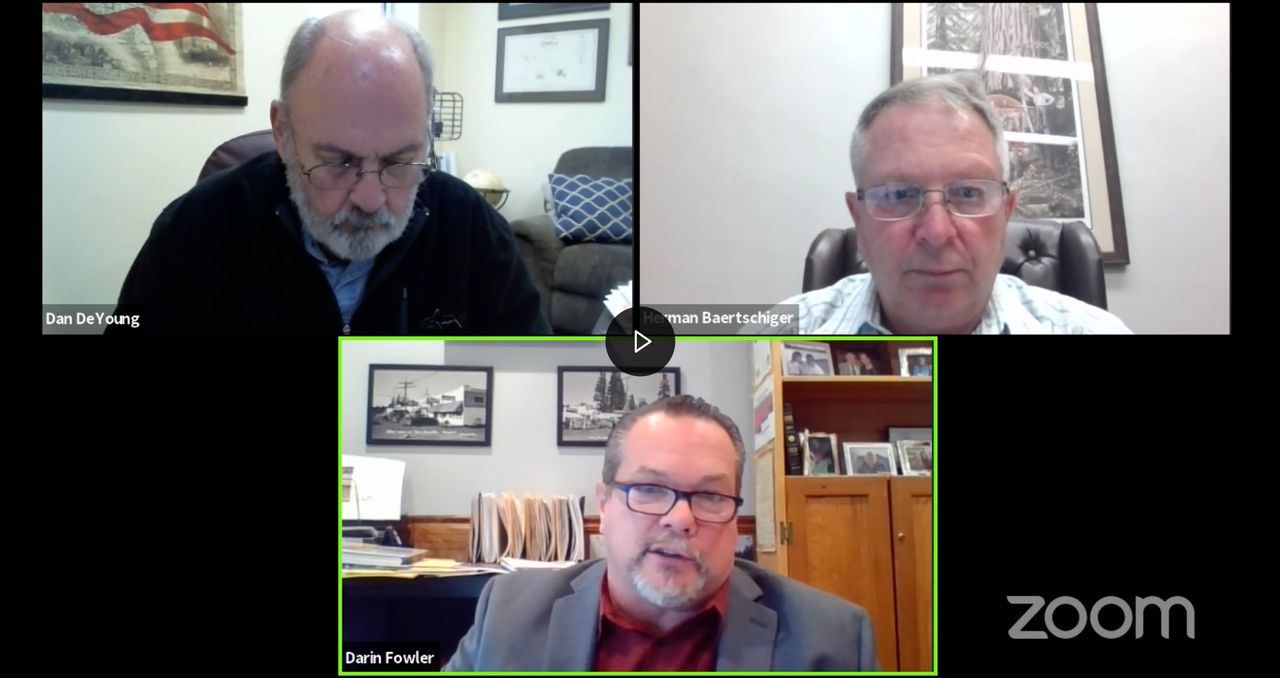 An elected official representing Oregon’s 12th most populous county told residents listening to a public meeting Wednesday they should put their faith in God, not doctors or scientists, when it comes to their decision on whether to be vaccinated against COVID-19.

Fowler was reacting to public comments at the meeting, and the threat that Josephine County, like many rural areas of the state with low vaccination rates among health care workers, could face an exodus of unvaccinated hospital and medical clinic personnel when Gov. Kate Brown’s vaccine mandate for health care workers kicks in Oct. 18.

Fowler’s comments run counter to an overwhelming body of evidence that vaccines are safe and effective. The Oregon Health Authority has consistently said vaccination is “the safest, most effective, and most reliable way” to stay safe from COVID-19. The state public health agency has spent months attempting to combat misinformation and vaccine hesitancy, in part by encouraging people to “talk to your doctor about your concerns.”

“It’s clear that science-based interventions – from vaccinations to masks to social distancing – have slowed the spread of COVID-19 and saved lives,” Rudy Owens, a spokesman for the agency, said in an email Thursday. “But these interventions wouldn’t work unless the vast majority of Oregonians were willing to get vaccinated, wear a mask and be careful about social gatherings.”

The remarks from Fowler and the other elected officials during Wednesday’s meeting came despite Josephine County being one of the hardest hit by COVID-19 during the summer delta wave. Only 53% of county adults are fully vaccinated, compared to a statewide average of 70% and rates that top 80% in some of the state’s most populated areas. It’s also the latest example of the COVID misinformation, vaccine skepticism and anti-mandate rhetoric that county commissioners have been espousing for months. Earlier this summer, YouTube removed a video of one of the commission’s regular meetings for alleged misinformation.

Public health experts say low vaccination rates are why Josephine and other southern Oregon counties have seen record numbers of cases, hospitalizations and deaths in the summer surge of the virus driven by the delta variant.

But Fowler’s comments, which were echoed to some extent by Commissioner and former state Senate Minority Leader Herman Baertschiger, as well as County Chair Dan DeYoung, highlight the sweeping divisions around the state over the effectiveness and safety of the coronavirus vaccines, and who to trust.

“All the status (sic) about whether a person vaccinated died or one that was unvaccinated died, these are all just statistics,” said DeYoung. “Remember the old saying that liars use statistics and statistics are for liars, or something like that…I think the purpose of it is very apparent, and I think it’s very successful in dividing this nation.”

Wednesday’s meeting also underscored the disagreement over the governor’s authority to impose mandates on individuals in general and health workers in particular.

The looming vaccination deadline is raising concerns across the state that already understaffed hospitals and clinics could face a new capacity crisis when the mandate becomes effective and unvaccinated staff are put on leave or terminated. That scenario is already playing out in a variety of health systems, some of which established earlier deadlines for staff to verify their vaccination status because individuals are not considered immune until two weeks after they’ve completed their shots.

Challenges to vaccine mandates have generally fared poorly in court. Earlier this week, the Oregon Court of Appeals declined to issue a temporary halt to Brown’s vaccination mandates, a measure it was asked to take in a lawsuit filed by a group of 25 healthcare workers, firefighters and paramedics from around the state. The ruling said the plaintiff’s arguments in the case had “little to no likelihood of success.”

Attorneys for the state highlighted a 1905 U.S. Supreme Court case that upheld the authority of states to establish vaccine mandates, in that case, smallpox vaccinations. They also cited the state’s power to require school children to undergo vaccinations.

Concerns about the ramifications for unvaccinated medical workers may carry greater significance in Josephine County, a largely rural jurisdiction in southern Oregon that includes the city of Grants Pass. State data shows that as of Sept. 5, Josephine County had a vaccination rate among licensed medical professionals of just 65%, the tenth lowest among Oregon’s 36 counties at that point, although that figure encompasses a vast swath of medical professions and has certainly increased in the past month.

At Wednesday’s meeting, the Josephine County commissioners unanimously voted to send a letter to the governor asking her to eliminate the vaccine mandate or extend the deadline until Nov. 30. Charles Boyle, a spokesman for Brown, said her office had received a number of similar requests from other counties, though he couldn’t immediately provide copies.

If anything, the summer COVID surge and resulting mandates have served to increase polarization and politicization over the virus and vaccinations.

“There are lots of opinions out there, especially on this COVID,” said Baertschiger, one of the county commissioners, who said he was not opposed to vaccinations. “In this political world, which I’m a little familiar with, as politicians look to gain ground, they are always trying to find wedge issues, whether it’s immigration, racism, and now it’s COVID. Everyone knows that this vaccine and COVID issue is a 50-50 issue. This is what we call in politics a wedge issue, and everyone is trying to wedge their way with it one way or another. But please understand there are other opinions.”

Fowler, for his part, repeatedly brought up politics when discussing his opposition. He impugned the Democratic governor’s motives, saying without evidence that her real motivation for imposing the mandate was to purge Republicans from the state.

“I think that’s a lot of what’s behind the governor’s agenda right now, is let’s cleanse Oregon of all the red and get as blue as we can,” Fowler said. “That’s also very un-American. It’s petty politics and it shows the immaturity of our governor’s level. She doesn’t know what she’s doing.”

He also added: “You cannot set aside the right of liberty and freedom for the sake of a mandate,” he said. “People still in America have the freedom to choose, and I am shocked that people are willing to give that up for the good of society. Sounds very communist, very socialist. That’s not what America is about.”

Boyle, the governor’s spokesman, said Brown was pursuing a pragmatic approach to a public health crisis, and her goal was keeping schools, communities and businesses open.

“Our hospitals are full, and our doctors, nurses, and health care workers are being stretched beyond their limits,” he said in an email. “Hospitalizations increased nearly 1,000% between July 9 and their September peak. The vast majority of Oregonians hospitalized for COVID-19 are unvaccinated. People are dying right now when we have safe, effective, and free vaccines readily available.”

He went on to say that COVID-19 outbreaks in workplaces across the state are happening right now and are already a disruption to the workforce.

“The Governor is pursuing the approach that makes the most sense from a public health perspective and from a workforce perspective.”