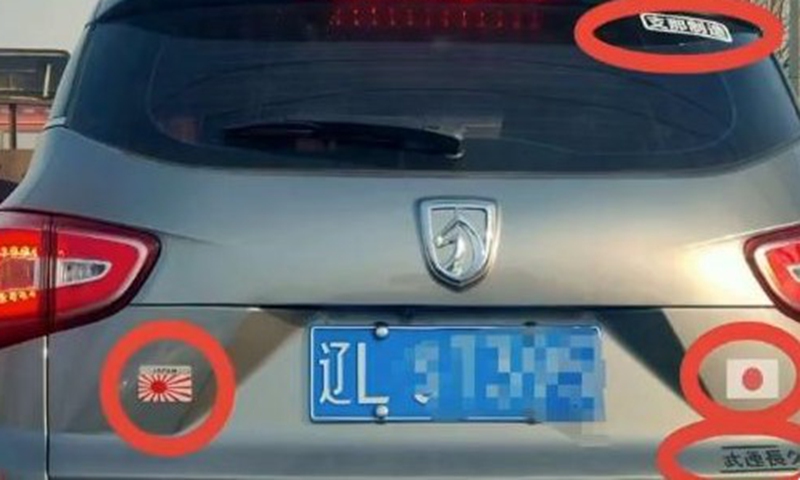 A shop owner in Northeast China’s Liaoning Province was detained for five days for making custom-designed car stickers featuring a Japanese rising sun flag, the war flag of the Imperial Japanese Army, and the insulting words “made in Zhina.”

The rising sun flag was a symbol of Japan’s imperialist expansion in China and other Asian countries during the War of Resistance against Japanese Aggression (1931-45). The word Zhina (or Chee-na) was an insulting term that the Japanese used to refer to China in the past. Both of them remind the Chinese people of the dark years and are regarded extremely inappropriate to be shown in public.

Police in Liaoning have imposed administrative detention for 5 days on the owner and a customer service staff of the shop, it stated on social media on Wednesday.

The shop made the stickers based on the requirement of an online client surnamed Zhang, the statement said. The shop didn’t reject Zhang’s requirement to make the inappropriate product, it added.

Earlier, residents of Panjin city in Liaoning reported to the police that Zhang’s car was pasted with the stickers. Photos of the car soon sparked outrage on social media.

“We would be letting down the Chinese people and all the sacrificed martyrs if we didn’t arrest you,” a police officer said to Zhang, according to a video Panjin police uploaded on Twitter-like platform Weibo on Saturday. The video has been viewed more than 358,000 times.

A similar incident also took place in Nantong, East China’s Jiangsu Province, as a local car owner was detained for 15 days by police in late September for painting his car with words expressing support for the notorious Japanese Army Unit 731, which conducted brutal human experiments and bacterial warfare in China during the War of Resistance against Japanese Aggression (1931-45).

The car owner surnamed Yin was acting out of “curiosity” and “an intention to brag,” said a statement issued by Nantong police on September 27.