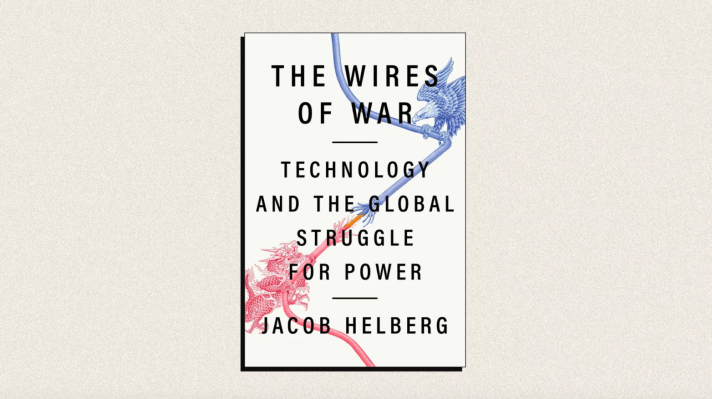 If China once seemed to be committed to the free market economy, over the course of 2021, it has shattered that illusion entirely by abruptly disempowering its own tech companies and turning up the dials on media censorship at the direction of a president who, three years ago, oversaw the erasure of presidential limits from the country’s constitution. (These were a short-lived experiment, in any case, given that China has been “dominated for thousands of years by absolute monarchs,” as NPR noted at the time, with term limits first introduced in the 1980s.)

The U.S., and Silicon Valley in particular, needs to be paying much closer attention to this consolidation of power, suggests Jacob Helberg, who is co-chair of the Brookings Institution China Strategy Initiative, a former senior adviser to Stanford’s Cyber Policy Institute and a former news policy lead at Google. (He was also an adviser to U.S. Transportation Secretary Pete Buttigieg during his presidential campaign.) In a gripping new book titled “The Wires of War: Technology and the Global Struggle for Power,” Helberg lays out how China’s “techno-totalitarian” regime may be first impacting the Chinese people (its “first victims,” he says), but why its efforts to increasingly control the software and the hardware of the internet are a real and present and fast-escalating danger to the U.S. and democracies everywhere.

Indeed, he says, one need look no further than India — which seemed to receive a warning by the Chinese government last year when the power went out in a city of 20 million people — of what could be coming to the U.S. absent drastic and unified action on the part of private industry and the federal government. He talked to us yesterday in a chat that has been edited for length.

TC: You started your job at Google, focusing on its global news policies, just ahead of the 2016 U.S. presidential election. Given that so much attention was paid at the time to Russia and its misinformation campaigns, I’m surprised you didn’t write a book about U.S.-Russia relations.

JH: Well, there are really two fronts to this “gray” war: the front-end software battle to control what people see on their screens, which has a lot of different players, with Russia one of the first movers in the space with respect to foreign interference. Then there is the back-end hardware front of the war that’s focused on the physical internet and the physical infrastructure of the internet. Ultimately, one of the reasons that the book primarily focuses on China is because the most decisive area of this war is going to be about controlling that physical internet infrastructure. If you control the infrastructure of the internet, you can basically control or compromise anything that runs on top of it. If you control the back end, you can also compromise and control the front end. That’s why we should be placing far more substantial effort [on the latter].

Artificial intelligence is interesting because it’s obviously a combination of software and hardware, but yes, it’s basically fiber optic cables, 5G satellites, low orbit satellites, and so forth.

In the book, you quickly highlight China’s alleged attacks on India last year, which shut down trains and the stock market and forced hospitals to rely on emergency generators. Do you think we’ve seen [attacks] in the U.S. that the public, at least, didn’t connect to China?

It’s also really genuinely hard to do attribution sometimes. So it’s not impossible that we’ve seen similar types of cyber attacks in the U.S. as were carried out in India, but we do know [for a fact] that we have had substantial cyber attacks on the U. S., with many people from the intelligence community concerned about the integrity of our energy grid. The Office of Personnel Management has obviously been hacked, which is important because that basically means that China now has a list of a lot of government employees with access to top-secret information. The list [of cyber attacks] is very long.

But you think the India hack was still a warning to us all.

The reason that hack was so historically significant is it was the first signal that if this gray war were to turn hotter, it could potentially be one of the first wars that we have experienced since the the Revolutionary War where we actually see significant physical destruction on our homeland carried out by a foreign actor. With the exception of 911 and with the exception of the Civil War, which was an internal war, we’ve never seen a foreign power actually reach our shores and and carry out mass destruction. [Given] the cyber attack that was carried out on India, you could imagine a scenario where, if our relationship with China really went south, that’d be a potential . . . well, we would have to make sure that our nuclear power plants are awfully safe.

How do you think we should we respond to this threat? The U.S. government has taken a very strong position against Huawei and its bid to build infrastructure in the United States. You point out that companies like Zoom have a lot of Chinese employees and potential exposure to Chinese intelligence. Where do we draw the line? And how does the government marshal a response that also protects the rights of businesses?

It’s such an important question for the critical juncture that we find ourselves in currently, especially with the looming risk of a potential Chinese invasion of Taiwan. I’m a very big proponent of the idea of the U.S government establishing an outbound CFIUS framework. We right now have a framework that provides the U.S. government with the ability to review and potentially block any inbound investments from a foreign country on the grounds of national security; the basic idea would be to apply the same framework for outbound investments. So basically, give the U.S. government the tools to review on grounds of national security any investment from the United States to outside of the United States and particularly to China, because over time, as we’ve seen when American companies pour billions of dollars into China, that can sometimes pose some real problems.

How realistic do you think that is given the financial incentives that companies have to continue expanding into China?

There are already proposals making their way through the halls of Congress that trend in that direction and that are somewhat analogous to what I’m suggesting, so I think these ideas are very much on the horizon. As for when these issues are going to become pressing enough to be prioritized by Congress and get the kind of support needed to make it to the President’s desk might actually be driven by a crisis, because obviously in Washington, a lot of things happens in moments of crisis, unfortunately.

Yes and no. Look at gun control in the U.S. But it’s interesting the way you frame this away from the idea that the U.S. versus China is a competition because there really are no mutually observed rules, even if at times in the past, it has seemed so.

When you say that it’s a competition, you’re communicating the embedded assumption that you can afford to lose, because when you’re in a competition, you can afford to win or lose. We compete with the Germans and the Japanese commercially all the time, but if Toyota sells more cars than General Motors, it’s really not that big of a deal. It’s the marketplace; we operate on a level playing field along rules that we mutually abide by. The reason “war” is much more accurate and apt for the current set of circumstances with China is because because we’re talking about a political struggle and the outcome is about the political survival of our system and it gives you a certain level of mental clarity about how to prioritize certain things that are necessary ti treat this challenge with the level of determination and urgency that’s needed to produce a successful outcome.

The other thing is that when you’re in a war, you’re much more willing to absorb short-term costs to produce a successful result. During World War Two, General Motors was building tanks and airplanes and we really mobilized as a country. Here, we’re obviously not asking Apple to build aircraft carriers, but one of the short-term costs that we need to seriously start thinking about is: how much is it going to cost for us to move our supply chains out of China? Because that’s going to cost money and require effort, and it’s going to be hard. But the potential cost of us being cut off from access to our supply chains is so high that it’s worth the relatively lower costs of putting in the effort, energy, and time to do this before it’s too late.

In the book, you note that this decoupling of economic foreign policy from national security objectives dates back to the Cold War. Now you’re suggesting an outbound CFIUS program and moving all of our supply chains out of China. What other incentives do you think that private industry needs in order to wean itself off China or focus less on it as huge market opportunity?

A lot of the programs that have worked in the past often boil down to carrots and sticks, and I think a combination of certain penalties that are applied to disincentivize [investors and outfits] from engaging in highly sensitive investments in China, [while also] incentivizing other types of behavior, like trading with other countries that do not pose risks to the U.S. or democracy, is probably going to be the mix that succeeds and resonates with the business community.

You also make the distinction that the U.S. is at war with the authoritarian government of China, not the people of China. Very unfortunately, that message doesn’t seem to be getting through to everyone.

It’s really worth repeating when I talk about a gray war and during our national debates about our issues with China that this is not about anything that has to do with the Chinese people or Chinese culture but instead the political regime and the [Chinese Communist Party].

Part of why we’re on the right side of this equation is that the first victims — and the people who have suffered the most at the hands of the CCP — are the Chinese people. It’s important to remember that Uighurs, Tibetans and political dissidents are Chinese nationals, too, even though they’re treated as third-class citizens. And those are who we also need to keep in mind because Chinese state news media will often try to promote the narrative that any talk of a hard stance against China is racist.