The highlights this week: New Delhi and Beijing conclude their 14th round of talks in an ongoing border crisis, India announces the official dates for state elections in the coming months, and a hit Netflix show casts a Pakistani movie star.

If you would like to receive South Asia Brief in your inbox every Thursday, please sign up here.

India and China have been embroiled in a border crisis in the mountainous region of Ladakh for nearly two years. It began in May 2020, when Chinese troops made incursions into territory controlled by India, and it reached a peak that June with deadly clashes that killed 20 Indian soldiers and four Chinese soldiers.

Many months later, the crisis has not yet ended, thanks in great part to political considerations and strategic calculations in both countries. On Wednesday, Indian and Chinese military officials held talks to try to resolve it—the 14th round since June 2020.

Indian officials described the talks as “constructive.” But officials failed to reach agreement on a key agenda item: troop disengagements from the Hot Springs area, where up to 50 troops on both sides have hunkered down for another winter. (Previous rounds of talks have led to some disengagements from other areas.) Both countries still have thousands of troops along the border in eastern Ladakh.

The India-China border, known as the Line of Actual Control (LAC), extends for nearly 2,200 miles and is not demarcated. The two countries have engaged in many border spats, including a war in 1962. But they don’t typically last so long. The most recent major crisis, in 2017, went on for two months. That the Ladakh crisis has continued for two years reflects domestic politics in both countries, regional geopolitics, and the nature of the crisis itself.

Both China and India are led by deeply nationalistic governments, and neither side has a strong domestic political incentive to back down. Chinese President Xi Jinping’s nationalism has played out in foreign policy through an aggressive pursuit of Beijing’s interests abroad, including its territorial claims. Indian Prime Minister Narendra Modi expresses nationalism internationally by taking hard lines against India’s rivals. After the 2020 clash in Ladakh, he curbed commercial cooperation with China, although bilateral trade volume still crossed $100 billion in 2021.

Before the border crisis, India-China tensions already ran deep, thanks to an expanding Chinese presence in South Asia through the Belt and Road Initiative. Beijing had grown concerned by increasing U.S.-India security ties and New Delhi by deepening China-Pakistan relations. More recent developments, such as the momentum of the Quadrilateral Security Dialogue and U.S. and Indian criticism of China’s handling of COVID-19, have further poisoned India-China relations.

Finally, the Ladakh crisis was no run-of-the-mill dispute: Border spats between India and China are rarely violent, much less deadly. Troops don’t carry heavy weapons while patrolling; in June 2020, Indian soldiers were reportedly beaten with nail-studded rods and thrown to their deaths into a freezing river. Some died from asphyxiation and hyperthermia. The intense violence was inherently escalatory, generating anger and mistrust that won’t be easy to overcome. Each side has many steps to climb back down to de-escalate.

India and China appear to be digging in for the long haul. According to a South China Morning Post investigation, both countries are building infrastructure along the border, including airstrips and garrisons. They’re conducting surveillance and staging drills. Chinese forces have deployed a long-range rocket launcher closer to the border. In October, Indian Army chief M.M. Naravane didn’t mince words. “If they are there to stay, we are there to stay, too,” he said of Chinese forces.

Kyle Gardner, an India-China border expert, warns that such activities point to a “sustained, broader militarization of the LAC” and highlight the heightened risks of small-scale conflict. Given what happened last time, a fresh standoff could easily turn bloody. With each side seeking to protect itself, the long-standing protocols on the use of firearms may be discarded.

More weaponry raises the likelihood of more violence and increases the risk of extended hostilities between Asia’s two nuclear-armed giants. Each of these developments shows why continued dialogue is essential; it hasn’t put an end to the last crisis, but it can still head off the next one.

India announces state election dates. On Saturday, India’s election commission announced the dates of the country’s five state elections in 2022, set to take place in the coming months. Uttar Pradesh, India’s most populous state and biggest electoral prize, will host voting over five phases between Feb. 10 and March 7. Voters in Goa, Punjab, and Uttarakhand will go to the polls on Feb. 14, and Manipur will hold elections on Feb. 27 and March 3.

Nearly 200 million of India’s roughly 900 million eligible voters could go to the polls during this period. Results are expected on March 10. For now, the immediate concern surrounding the elections is campaigning amid a spike in new COVID-19 cases fueled by the omicron variant. This week, India’s daily positivity rate has exceeded 13 percent. Death rates have surged in some areas, including New Delhi, but overall rates of hospitalization and death are low compared with last year’s devastating surge.

Some Indian officials nonetheless called for voting to be delayed, but the election commission opted to go ahead largely as planned. A ban on large campaign rallies lasts through Jan. 15, when it will be reassessed.

Pakistani star cast in The Crown. Variety reported last Sunday that Humayun Saeed, one of Pakistan’s biggest movie stars, has been cast in the next season of the hit Netflix show The Crown, which focuses on the British royal family. Saeed will play Hasnat Khan, a British Pakistani heart surgeon who was in a romantic relationship with Diana, princess of Wales, from 1995 to 1997.

This news marks the second recent announcement of a top Pakistani actor taking part in a major project in the West. Last month, news emerged that Fawad Khan was cast in the upcoming series called Ms. Marvel, about a Pakistani American teenage girl with super powers, played by the Pakistani Canadian actress Iman Vellani. For all the talk of Indian Bollywood stars crossing over to Hollywood, Pakistani film stars are doing their part, too.

Supreme Court to review Modi security breach. India’s Supreme Court announced on Monday that it will investigate what New Delhi has described as a “major lapse” in security involving the prime minister. On Jan. 5, Modi’s motorcade was stuck for 20 minutes on a highway overpass in Ferozepur, Punjab, and besieged by protesters. The Punjab state government says there was no breach, that it warned Modi’s office to leave the state due to weather and planned protests, and that it wasn’t informed that Modi would travel by car.

Leaders from the ruling Bharatiya Janata Party (BJP) argue political factors are at play. Punjab’s government is ruled by the opposition Indian National Congress, led by the Gandhi family. In 2019, the Gandhi family accused New Delhi of trying to downgrade the security protocols it receives from the central government. (The government denied the charge.) The BJP also recently established an electoral alliance with the former chief minister of Punjab, who has since left the Congress party.

The Supreme Court investigation will determine whether the overpass incident simply resulted from mistakes by the Punjab government or was part of a calculated effort by the opposition to get back at Modi and the BJP.

Quote of the Week

“The United States should swallow the bitter pill of working with the Taliban-led government in order to prevent a failed state in Afghanistan.”

—Laurel Miller of the International Crisis Group, arguing for more U.S. engagement with the Taliban regime in Kabul. 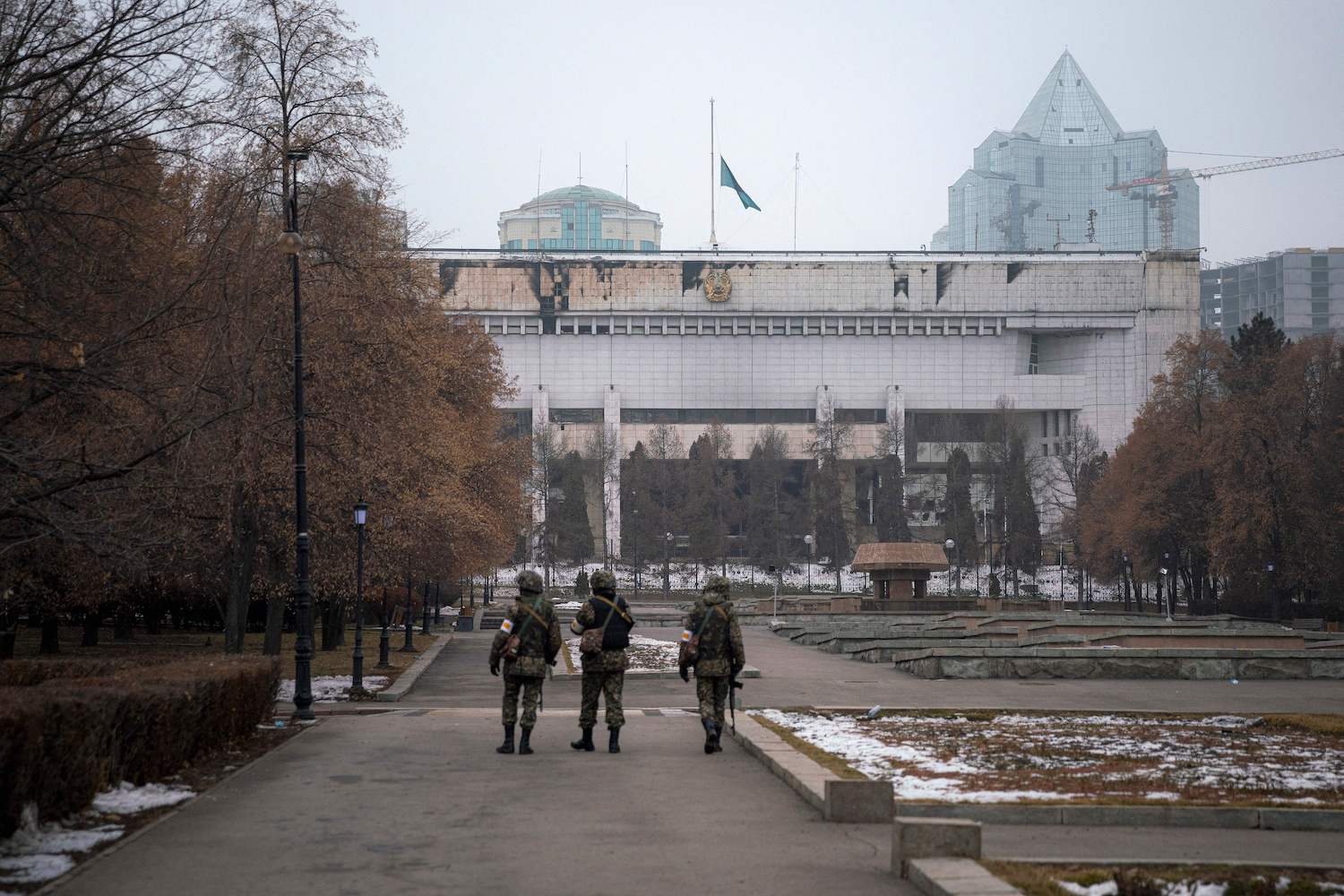 Many governments have issued statements about the recent crisis in Kazakhstan—including the Taliban regime. On Jan. 6, the Afghan Ministry of Foreign Affairs released a brief statement expressing concern about the unrest and urging “both the government & protestors to resolve issues through talks & peaceful means.”

The statement is ironic given the Taliban’s track record, but the regime has plenty of good reasons to release it. The Taliban seek to project themselves as a legitimate and peaceful government entity—part of an ongoing effort to gain formal recognition from the international community. Kazakhstan, like most Central Asian states, is a country the Taliban hope to engage with, and it serves regime interests if it remains stable.

Last month, the Kazakh trade minister visited Kabul to discuss trade and connectivity cooperation, and Kazakhstan has recently provided medical and food supplies to Afghanistan. Kazakhstan has also hosted dozens of staffers with the United Nations Assistance Mission in Afghanistan who were relocated to Kazakhstan after the Taliban takeover.

Given how the Taliban view their relationship with Kazakhstan, the Jan. 6 statement shouldn’t be dismissed purely as propaganda. It likely reflects some genuine sentiment.

An editorial in the News International argues that the Pakistani government, which heavily promotes domestic tourism, must make changes after a recent snowstorm killed 23 people driving to a famous mountain resort. “The crux of the matter perhaps lies in ensuring better administrative management. … There can be no tourism initiative unless these bare basics are taken care of,” it argues.

Researcher Pradip Kumar Kafle writes in Nepal’s Republica that being a landlocked nation is not as much of a disadvantage as many observers believe. The absence of a coastline cuts out financial, security, and environmental costs, he writes, and being landlocked “has helped throughout our history to escape from invasions.”

In Dawn, retired diplomat Maleeha Lodhi lays out Pakistan’s top foreign-policy challenges in 2022: “In evolving its foreign policy strategy Pakistan has to match its goals to its diplomatic resources and capital. No strategy is effective unless ends and means are aligned.”